This game is the result of the combination of FPS Horror and Trivia game genres, and is a Ludum Dare 41 Jam submission.

Walk down the empty high school hallways and choose the right answer to the trivia questions or prepare to be spooked!

Slow movement, and I could barely see the questions (even when I was getting them correct). I honestly don't think this game is worth another play-through.

This game is so much fun that I liked it! But I didn't win :'D

Reply
The Frustrated Gamer1 year ago(+2)

THIS WAS AWESOME! Not a huge game, but a lot of fun while it lasted!

Not bad! Would be nice if there was a camera angle available when cursor shows :)

this was a fun experience! I enjoyed this game and the creepiness around every corner!

This was very fun I just wish there was more.

Reply
Famed Killjoy2 years ago(+1)
Hi there, this was a fun little game. I know for a fact I'd be hard-pressed to come up with an idea trying to combine horror and trivia together, so I'd say you executed it pretty well. I found the questions to be rather interesting and of a fair difficulty, there weren't any trick questions, and a couple even managed to stump me. There are definitely a few good scares to be had here too, though I don't think I saw them all.

I don't really have any major complaints with the game, only thing I thought that could be improved on was the walking speed, as on my second attempt it was getting a little tedious walking so slow just to answer a question I had already answered correctly on my first attempt.

All in all it's a pretty clever game and not one that you'd ever really see elsewhere, it's a clash of two genres that really shouldn't work, but you've found a way to make it so. Props to you!

Hope you don't mind but I made a short let's play of your game.

I loved this game so much. I normally hate trivia games but, putting a horror spin on it is amazing! I wish the spooks were more scarier that's just me but, it didn't take away from the game at all. I also wanted the game to be longer just because  I was having so much fun!

Gave the game a shot over on my channel, ArthurPlays:

My mouse Stays On The Screen And Takes Forever to load

Fun little game! I liked how if you got it wrong, the only way you'd know is if it got creepier. Really well done. Just kinda wish there was a sprint button to get down the hallway faster and maybe more questions. Hope you enjoy the video!

Interesting idea, and done differently that some of the other games that use a similar mix of education/trivia and horror. I got spooked a few times, and also felt kinda dumb at others. Really enjoyed it.

I won first time... and I'm not sure I want to repeat and answer incorrectly, on purpose...

The mouse doesn't capture very well, it remembers where you are looking when the pointer enters the window, so you end up having to do weird movements.

Reply
JayPlaysOfficial2 years ago(+1)
This game was great! its was really nice to play a horror game that also tests your knowledge in order to survive! awesome job on creating this! :D
Reply
MicroHorrorArcade2 years ago(+1)

This game was definitely out of the box. I was expecting something totally different but was still pretty happy with what I got. The jumpscares and ambiance were pretty decent, especially for a quick ham game. The questions were SUPER educational, which was not expected since so many "edutainment" horrors have been popping up lately with super easy questions. I ended up having to google a lot of answers and I learned a lot from playing this! I guess I'm nowhere near as savvy with my random facts as I thought. Thanks so much for making this!

OoF, needs a reset button when lose instead of refreshing the page please

LAS is the wrong answer, anyway. 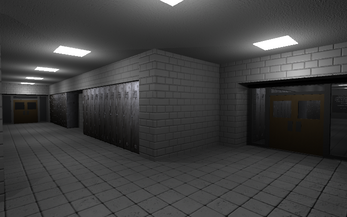 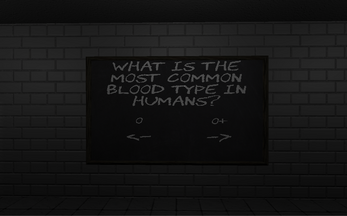